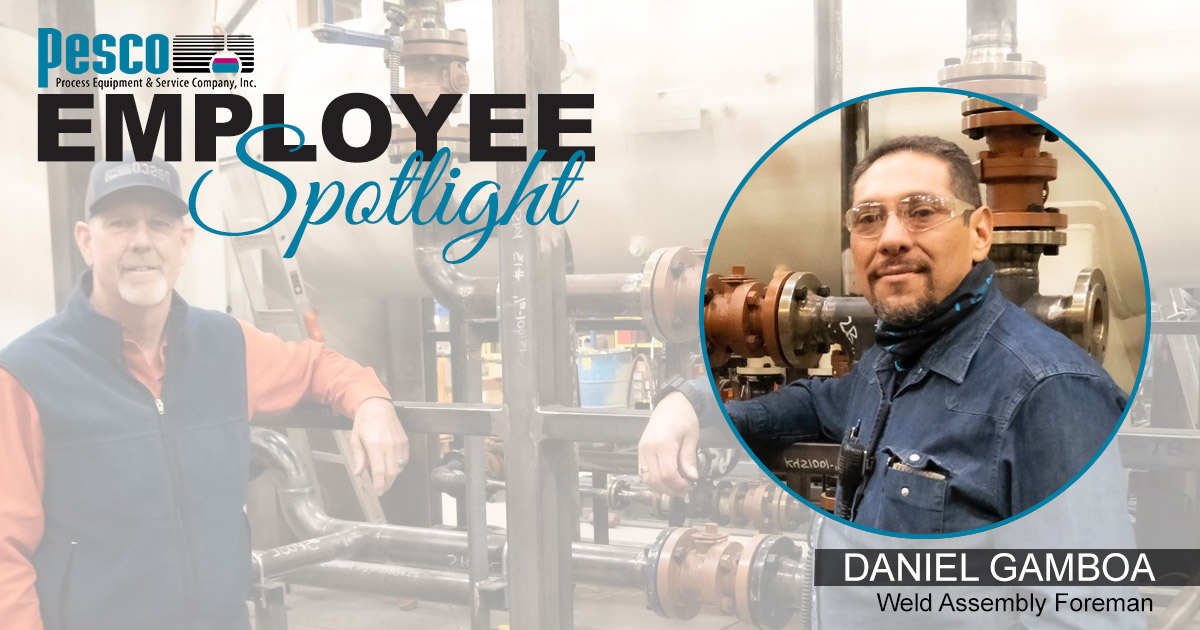 Daniel Gamboa sat down in the chair, looked down at his hands, then said, quietly, “PESCO saved my life.”

Daniel is celebrating nine years of sobriety – an addiction that he struggled with for 20 years. During those 20 years, Daniel became known in the community – known as an addict by local law enforcement. He also found a new place to live –  he spent four years in prison in Las Cruces for robbing a drug dealer and was charged for residential burglary and conspiracy.

Life changed for Daniel when he decided he wanted to use his skills as a welder and work for PESCO. He passed the mandated drug test and was hired as a code welder. Six months later, however, Daniel tested positive for meth. Linda Rodgers, PESCO’s Chief Financial Officer, said Daniel was tested because of a “reasonable suspicion” of drug usage.

“A friend cared about me enough to turn me in,” Daniel said. “I lied to my supervisor (about doing drugs), but the test came back dirty, as I knew it would.”

The Human Resources Department at PESCO told Daniel that they cared about him as a person and as an employee and encouraged him to get treatment. They offered him a position if he recovered and wanted to return to the company.

“I wanted out of here and I left,” Daniel said. “Six months later, I was right back where I started (doing drugs). I went to Overcomers (a support program) and I lied to them about my usage, but they saw right through that. They said I would need a year of counseling and I agreed.”

While Daniel wanted to change his life and win his battle with drugs, the lure of the drugs remained strong.

“I figured I’d do what they wanted me to do, then I’d go back to doing what I wanted to do,” Daniel admitted.

During the six months he continued doing drugs, Daniel lost a friend to an overdose and was known by the local gang task force. On February 11, 2012, Daniel hit rock bottom. He knew he had to change – for himself and for his family. Daniel went to his garage, where he kept a small container that he used to mix his drugs. He looked at the small amount of drugs he had left, and he thought it wouldn’t hurt to use, one last time.

“I thought I could use (drugs) right now, and nobody would know,” Daniel said, explaining that he never used drugs in the presence of his wife or his children, out of respect and his love for them. Thinking of his family, Daniel made a decision. “I flushed them all. That’s the day I won my battle with drugs.”

“I was done putting my wife and children through this,” Daniel said of his addition. “I called PESCO and asked if the offer of coming back still stood. They said yes, and I returned in June of 2012.”

PESCO was happy to have Daniel return – and that he beat the demon who had haunted him for 20 years.

“PESCO has a history of helping people,” said Chief Financial Officer Linda Rodgers. “God has blessed PESCO and during its 50 years in business, has helped countless people through tough times.  PESCO doesn’t just want it’s employees to be successful at work, but in life.”

Watson Benally is a friend and supervisor who works with Daniel and was glad to see him return to work.

“Daniel Gamboa is a man of God; a great leader; full of energy, humble; compassionate; great heart who loves to work with  the youth in our community and the people here at PESCO,” said  Watson.

Daniel’s recovery process included going to church with his wife and children. “I got on my knees and I surrendered my life to God,” Daniel said. “I told God I needed his help with my more than 20 years of addiction.”

PESCO also contributed to Daniel’s recovery. In addition to supporting him and encouraging his continued growth with the company, it also helped his family.

“PESCO gave my wife her husband back and my kids their dad back,” Daniel said of PESCO’s support in his recovery. “That’s the reason I love this company. God changed my life and now I can be the person I always wanted to be.”

“I see life as a puzzle,” Daniel said. “Each piece represents when we were born and when we die, and God puts the puzzle together. God uses all we’ve been through in our puzzle and it is because of God’s grace that he has used me.”

Daniel also had the support and love of his wife, who is a major piece in his life puzzle. “I would describe my wife, Shaundale, as a woman of God,” Daniel said. “When I went to prison, she was the sole provider and a single parent for my kids. She stayed with me and she raised our kids to follow Christ. And she never lost faith in me.”

As a survivor of an addiction, Daniel knows that God opens doors and Oasis Church in Farmington was a door God opened for him.  He offers his insights, his encouragement, and his story with others at Oasis and at the San Juan County Detention Center. He is proud to be on the board of the church. As a survivor, Daniel’s life now revolves around his family, his church, and his commitment to help others.

His pride in his children is evident when he speaks of them. Rebekah is 22 and is a junior at New Mexico State University and “is my favorite, because she is my first born,” Daniel added with a grin. Nathan is 21 and is currently in the police academy. Erin, who is 20, is a youth pastor at Oasis Church, and Devyn is 17 and a junior at Farmington High School.

In his spare time, Daniel enjoys mountain biking with several friends, who share his faith. “I love biking,” he said. “When I’m biking, my only focus is on the ten feet in front of me. I can’t see the stresses or the worries in life; I just concentrate on riding and looking ahead.”

“I’m grateful God led me here, to PESCO,” Daniel said. “They gave me a second chance and God’s timing was perfect. They changed my life and the person I was. I hope I am always helping and speaking to those God puts in my path.”

For Linda Rodgers, Daniel has been more than a great employee – he is also a great friend.

“My husband was going through cancer treatment and Daniel stopped by my office to check on me,” Linda said. “I was humbled that he thought of me and shared a prayer with me.  It helped get me through a rough day.”

“PESCO has given me the opportunity to advance and utilize my past to help others,” Daniel added. “The tools PESCO has given me include giving me the knowledge that everyone is going through something and my words can empower and bring out the best in people.”

PESCO’s website states the commitment the company has to its employees, its community, and the people it serves. “PESCO is not just a place to work. It’s a place to build better lives and communities.”

Daniel Gamboa is grateful that PESCO gave him a second change to build a better life for his family and himself – and to share his story with those in his community who can benefit from it. Daniel embraces PESCO’s emphasis on integrity and knows he must live it. “Integrity is always doing the right thing, even when you know no one else is looking.”