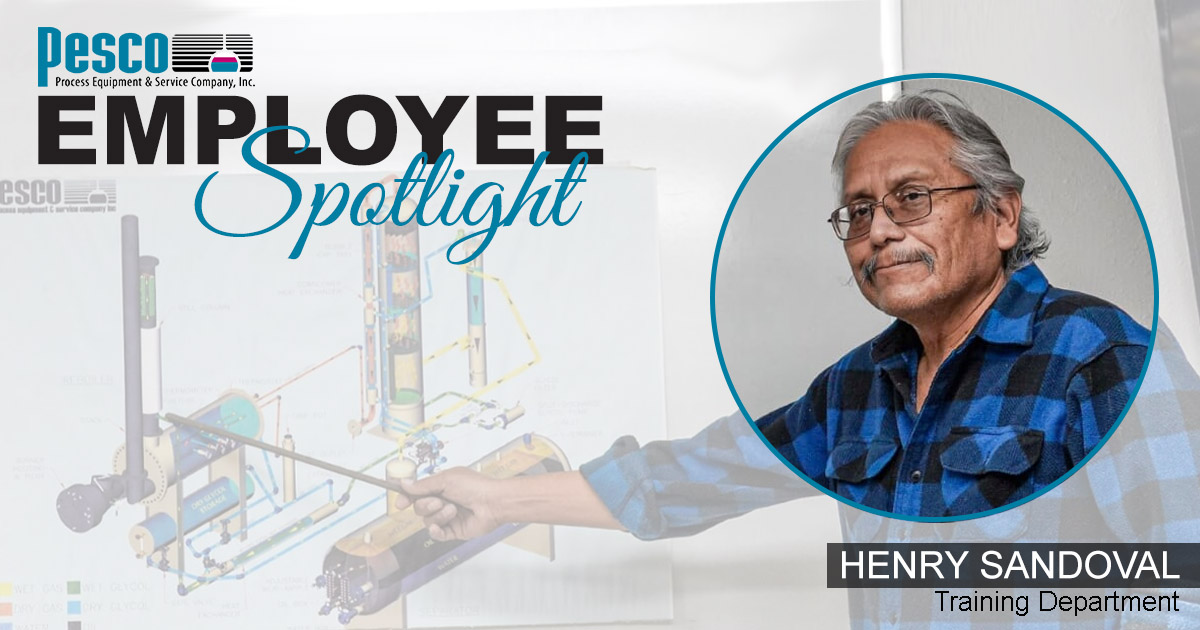 Henry Sandoval has been part of the PESCO family for over 25 years. He started in the days when PESCO was still a small family-run company.

Henry’s exemplary qualities are quite evident- problem solver, visionary, and teacher.  “The values at PESCO- Mutual Respect & Trust, Integrity, and Commitment to Excellence– truly resonate with him.  Kyle Rhodes, President and CEO of PESCO said “Henry is one of those people who defines PESCO.”

Henry began his career with PESCO as a pipefitter and today he works in the Training Department. When asked how he would describe his experience with PESCO, he said, “It’s a good place to work.  PESCO has always treated me right- they’ve always been good to me.”  Henry went on to say what he appreciates most: “PESCO treats their employees like family.  They do a lot to support their employees.”

Henry brings value to the company regularly by recognizing ways to make processes run more efficiently. He participated in implementing the “Five S System,” which helps organize the workspace and increase productivity. Henry is constantly asked for insight on various projects and, at times, has offered recommendations during the engineering process.

Henry is passionate about his work at PESCO and has a real gift for imparting wisdom and knowledge to those willing to learn. Kyle said, “What I admire about Henry is he is always teaching, he is always equipping, and he is always very positive. His attitude when helping others is just phenomenal. Henry is one of the most knowledgeable people that PESCO has ever had in service.” Henry mentioned two mentors he is very grateful to have worked with:  Blake Wallace and Allan Hawbecker.  He said, “I learned a lot from these two men.”

One of Henry’s proudest moments with PESCO was the expansion project that led to expansion of the manufacturing footprint.  He had long anticipated this expansion and was proud to be a part of seeing it come to fruition.  “Before that, we had to work out in the cold.  It meant a lot to see the enclosed structure when it was built.” Once this growth happened, better equipment was brought in for the crew, and he was happy for them.

Henry’s eyes lit up when asked about his family.  He and his wife, Anita, have been married for 43 years and have raised five children, of whom Henry is very proud.  In his spare time, Henry enjoys being with his family.   One special memory he reminisced about was trips to watch his girls play softball and said that his son is now a registered nurse in Albuquerque. He looks forward to summer trips to watch his grandkids play fastpitch softball once the COVID restrictions are lifted.

When asked what the future holds for him, Henry said he still has a few years before retiring.  He is still deciding what that time will look like for him. Perhaps he will have a small shop where he builds utility trailers, possibly work with the family livestock, or travel with Anita.

It was evident that Henry has a keen sense of the importance of PESCO’s drive to diversity. Being in the oil and gas industry for over 43 years, he is all too familiar with the highs and lows.  Henry acknowledged that “with more irons in the fire, PESCO will always have something to fall back on.”

Henry trains many of those employees who begin their careers at PESCO.  Henry said he advises new employees to “learn as much as you can at PESCO.  If you are in one department, go beyond that and expand your knowledge. PESCO is a great place to learn.  We have some knowledgeable people here at PESCO who are willing to teach you new things.  People are not always given that experience or opportunity to learn in other companies.” Henry would like to thank PESCO for giving him the chance to work for them.  PESCO has come a long way, and he is grateful to be a part of it.