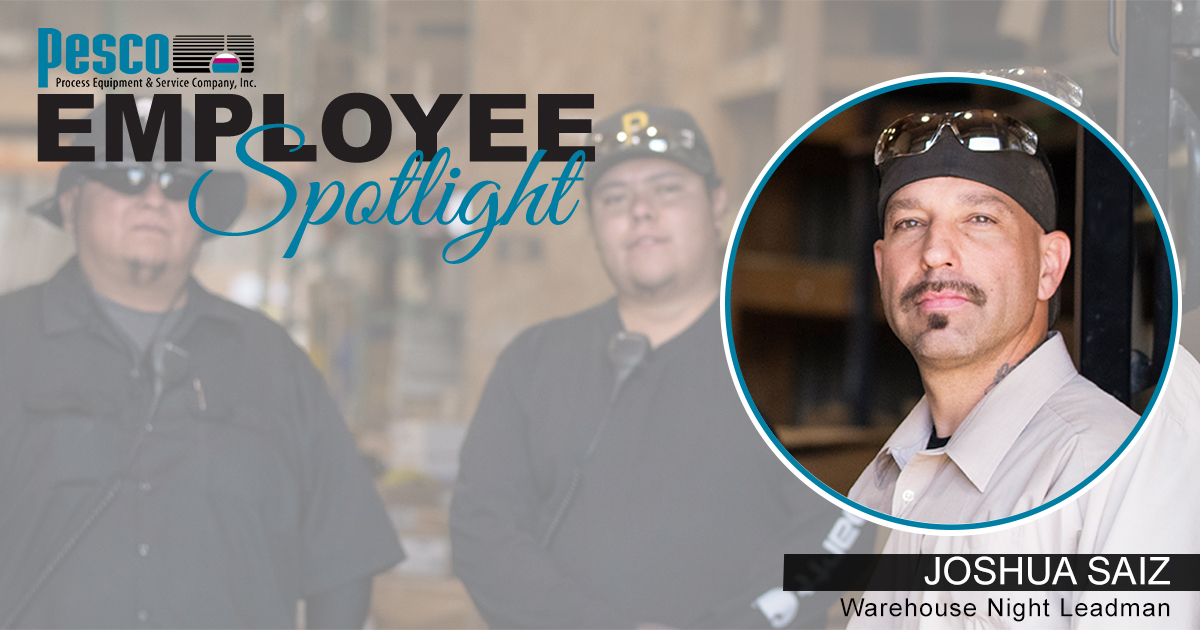 Starting over a little late in life, PESCO offered Josh Saiz a second chance. Sometimes, it’s all a person needs to succeed.

Josh is the Warehouse Night Leadman at PESCO’s Main Plant. A native of San Diego, California, Josh was born into some of life’s most trying circumstances. Losing his father to drugs at the age of two and being raised by a mother who was also addicted to drugs, Josh’s young life was open to much instability. By the time he was 12, Josh began a 33-year cycle of repeat imprisonment. To say that PESCO was a godsend is an understatement.

Josh learned about PESCO while in a local men’s transitional home, Byron’s House of Hope. He heard PESCO was a great place to work, and he was ready to build a life he had never known.

From the time he was hired, Josh has brought his best to work daily. It didn’t take long before this level of work ethic drew the attention of Warehouse Supervisor Larry Moore. Josh had only been with PESCO four months when Moore offered him a promotion to Night Leadman. Moore says of Josh, “He is dependable. He consistently goes above and beyond, putting his total effort toward what is best for ­the company.”

Moore went on to say that “Josh leads a strong team and expects a lot out of them. Leading by example, he won’t ask anything of them that he isn’t willing to do himself.”

Josh is grateful for the PESCO culture. He enjoys coming to work and finds that several employees have strong integrity and willingly impart their knowledge about the job and wisdom for life. This motivates Josh to learn more about the company and its culture.

When asked about his personal life, Josh eagerly shared the joy his daughter brings to his life. He is grateful to build a relationship with her and smiles as he reflects on his struggle to say “no” to her at times.

Josh also mentioned one of his high points in life being his faith in God, saying, “God answered my prayer for strength to break away from the cycle of drug addiction.” He mentioned several mentors who continue to inspire his spiritual and personal growth.

While Josh is still on the path of learning what his new life looks like and what it means to make goals for his future, he anticipates a long career with PESCO.