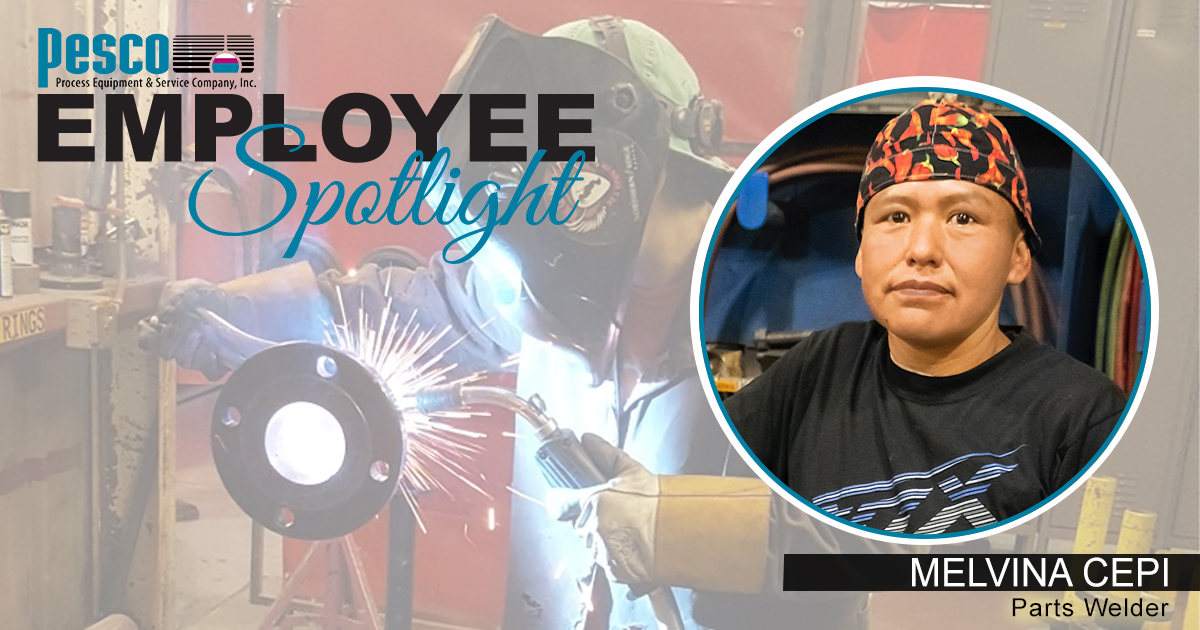 Originally from Dilkon, Az., where she was a landscaper, Melvina was ready for a career change when she moved to New Mexico. A relative suggested she return to school. Reluctant at first, Melvina decided to give it a shot and enrolled at the San Juan College Welding Program. She soon discovered that she had made the right decision as she thoroughly enjoyed learning the trade. Having met some of the PESCO Foremen through the program, Melvina began her career at PESCO in 2018 after graduating with her Welding A.A.S.

Only 3 years into her career, she says she feels confident but acknowledges that there is still quite a lot to learn. “When I have questions, my coworkers are always willing to help. Everard Silas and Bask(erville) Beyale (PESCO Trainers) are great at helping us understand when we aren’t sure about something.” Melvina’s goal is to ultimately become a Code Welder. The Code Department at PESCO consists of the most highly skilled welders. When asked about her job at PESCO, she said, “I love it! I look forward to what I do and am always learning new things.” Expressing appreciation for her coworkers, Melvina went on to say, “We’re like family here.”

She laughed as she talked about the time when Nashota Yazzie, PESCO Human Resource Manager, invited her to play on the PESCO softball team. She said she did not know how to play the game but enjoyed hanging out with coworkers outside of work. “They would yell from the dugout so I would know when to run,” she said with a grin.

It is evident that her natural family is an important part of Melvina’s life. Melvina is fluent in Navajo and expressed the importance of knowing her heritage. She enjoys family gatherings where they share meals, work the land, and go on hikes. Melvina values the wisdom that is passed on from the elders of the family who emphasize the importance of hard work and helping family.

Melvina looks forward to her future with PESCO. She expressed her gratitude for the Rhodes family and the opportunities they have provided, saying, “I appreciate Kyle and his family. And I am thankful for the leadership who allowed me the opportunity to work for them. PESCO is an awesome place to work!”