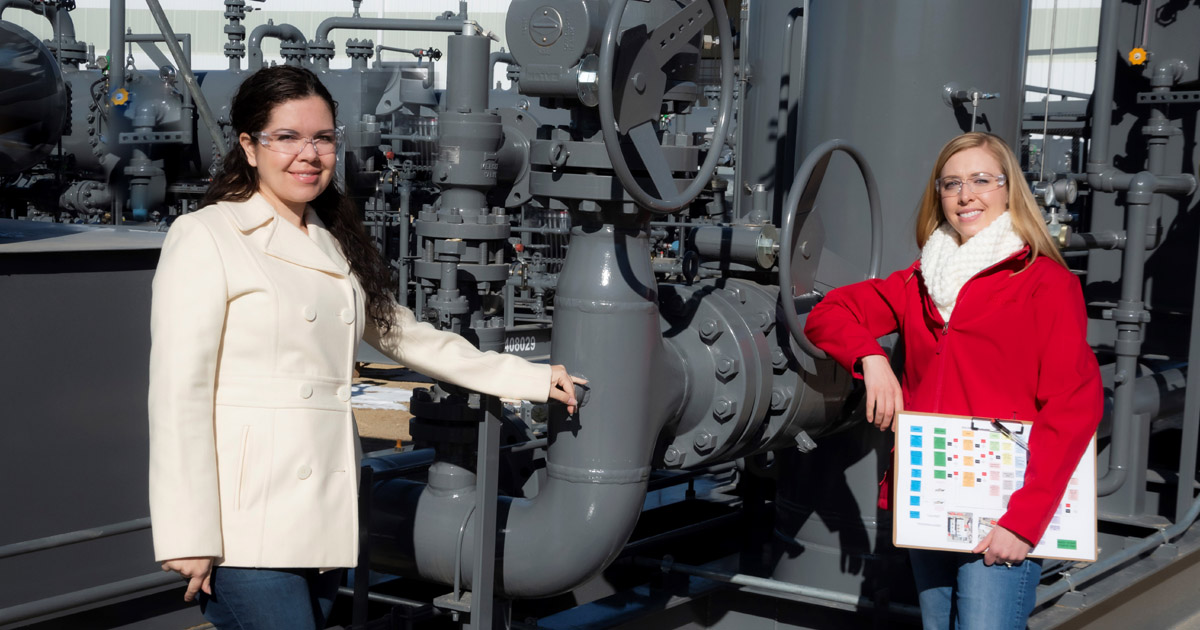 Leanna worked in the San Juan basin before she transferred to Houston in 2014 and worked there for two years prior to moving back to Farmington in 2016.  She chose to stay at home with her young daughter while working from home as a consultant during that time.

Working for a company that is family owned and smaller (but still growing!) was different in many ways than working for a large corporation, Leanna and Michelle said. The variety of projects they get to participate in and working more closely with customers to find solutions to the problems is challenging and exciting, the women said.

“We learn new things almost daily,” Michelle said, “and there’s still so much more to learn.”

“Working with the fabrication shop to size and design equipment has taught me so much,” Leanna said, adding “and experiencing and seeing the way the PESCO team works together has been inspiring.”

Being employed by a large corporation can be somewhat rigid, Michelle said. “PESCO has given me the opportunity to think creatively,” she said. “Jim (Rhodes) is creative by nature and has taught me to think outside the box. He is great at coming up with solutions to problems.”

Michelle enjoys teaching school children about engineering. “I took a 3D model of a piece of equipment I helped design to my son’s class,” she said. “The kids enjoyed it.  In fact, later in the day some parents said their child now wants to be an engineer.”

Both women have goals they hope to achieve in the next five years with PESCO. Leanna hopes to grow with the company as it grows and work with diversifying into different industries. Michelle hopes to help expand the customer base by offering new solutions to new problems.

Leanna and Michelle said working for PESCO allows them to continue to succeed in their chosen careers and offers employees the flexibility to be with family when needed. When asked what three words they would use to describe PESCO, their answers were similar.

“Family, quality and versatility,” Michelle was quick to respond. Just as quickly was Leanna’s response – “Family, integrity and fun.” Linda Rodgers, Chief Financial Officer, said having Michelle and Leanna as part of PESCO’s engineering team has been incredible. “They are role models for women,” Linda said. “They prove you can have a family and a career and be successful at both.”