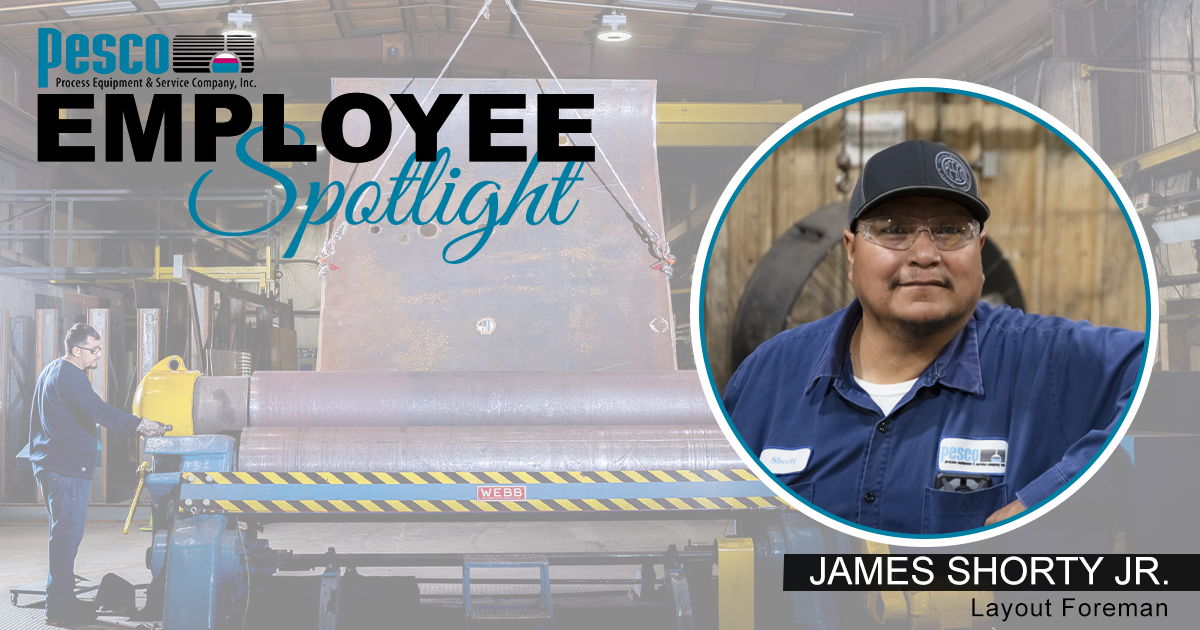 James Shorty Jr. is the Layout Foreman at PESCO’s Main Plant. The Layout Department is the first step in the manufacturing process. Once a job is released by a Project Manager, Layout will cut materials, roll cylinders, and prep materials for the next step, which is Code Welding and Parts Departments.

James, known as Shorty, began his career at PESCO at the age of 24 and has been with the company for over 27 years. He recalled how a friend from church encouraged him to apply at PESCO, knowing that his former employer had gone out of business. He was newly married, they had their first child, and he was eager to find work. The first person he met at PESCO was Charley Tyler.  He recognized him from high school football, where Charley was a referee. Shorty recalled being asked, “Do you know how to run a torch?”, when he said yes, Charley slid him a paper to sign, and he started the next day. He chuckled as he looked back on the starting wage and how the hiring process was handled compared to today.

“There are lots of things that have changed over the past 27 years.” Shorty said, “There have been significant improvements including Lean processes and safety regulations over the years.” He also noted the growth of the company from about 90 employees when he started, to nearly 500 in early 2019.

A work highlight for Shorty was when he played on the PESCO softball and basketball teams. “We played in the Farmington City League, regularly bringing home the championship. The late Mr. Ed Rhodes was supportive and always at the games.” He went on to reflect that, “Mr. Rhodes knew our names, knew about us personally and gave some of us nicknames.” He recalled Mr. Rhodes’ distinct chuckle, as he would call him “Mr. Basketball Man”.

Shorty has been a foreman since 2005 and appreciates the challenges that come with the position. He expressed gratitude for his former boss, Larry Baugh, saying, “He believed in me and helped me get to where I am today.” Shorty values the continued training he receives, as well as getting to meet and train many of the new employees. He would advise those new to PESCO to truly implement one of the company’s core values, “Commitment to Excellence”, saying, “Take personal responsibility to motivate yourself to become successful.  As a foreman, I can encourage an employee, but no one can do it for you.” He went on to say, “My father taught me excellence, telling me to arrive at my job early and find ways to do better in everything.” Shorty encourages his own children with this value as well.

In his personal time, he enjoys spending time with his wife of 31 years, Tina, their 3 children and their granddaughter.  He enjoys fishing and camping.

Shorty says he appreciates the culture at PESCO. He believes that being a family-owned company contributes to the way the employees are treated. He notes how, time and time again, he has seen the company “step-up” on behalf of their employees, and he is glad to be a part of the team.