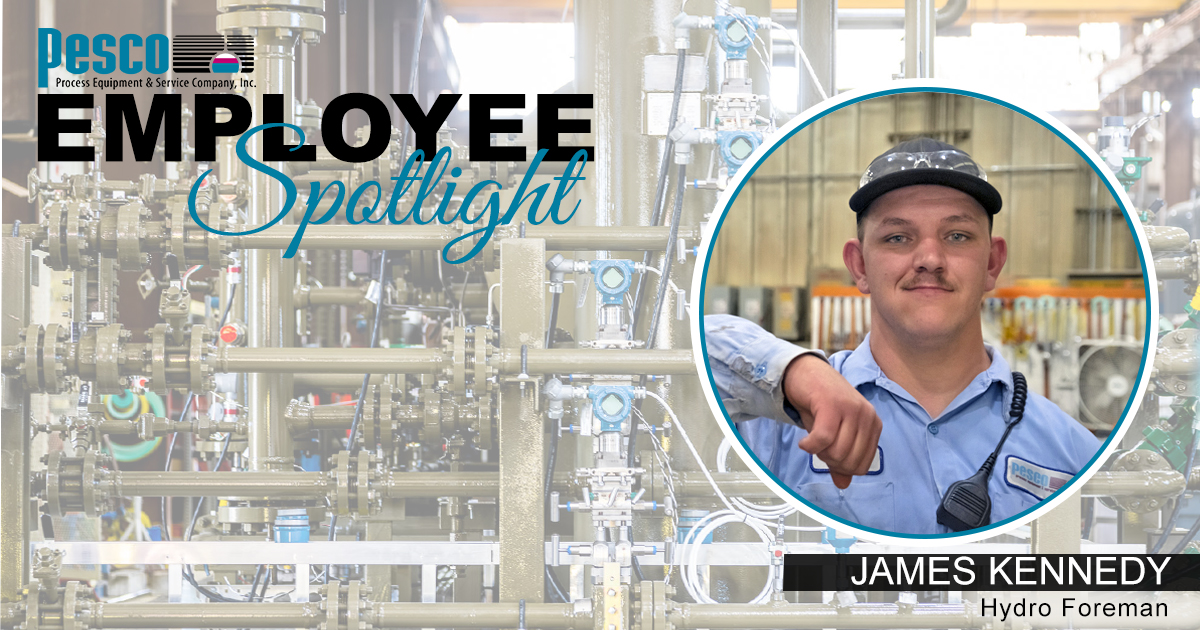 James Kennedy is a 28-year-old father of eight. When his previous job required him to be out of town, leaving his wife home alone with their children for weeks, sometimes months, at a time, they decided he needed to find a new place of employment.  He applied at PESCO and was hired at an entry level position as a pipe fitter. James is now the Hydro-Test Foreman.

When Kennedy joined PESCO 4 years ago, hydro testing was part of the Service Department. Randy Large, Chief Operating Officer, was instrumental in restructuring and establishing several of the departments at PESCO. It was then that they decided to make hydro a team of its own and James was given the opportunity to be the first lead on the newly structured Hydro Testing Team. After seeing the success of the new structure, the decision was made to develop Hydro Testing as its own department and James was offered the foreman position. He helped build his department, saying he was grateful to have been given the opportunity.

The attitude and atmosphere at PESCO are at the top of James’ list for why he enjoys his job. “At other places, employees are sometimes ‘just a number’. PESCO takes an interest in its employees and their families.”

When asked what he has gained personally from working at PESCO, James said he has, for the first time, developed a sense of pride. “I used to consider myself a grunt with a wrench. PESCO has helped me to see that I can be more. They have helped me find inner strength and I have learned to lead and establish healthy boundaries. I’ve learned not to settle and always continue to do better and climb the ladder.”

James’ hope for the industry is to see PESCO continue to grow and broaden their manufacturing capabilities. He has great respect for the leadership of PESCO, noting their proven record to lead well through tough times.  James says, “I trust they will continue to do good and make wise decisions.”

In his personal time, James keeps busy with family life and working his 5-acre farm, where he raises cattle and chickens. In his spare time, he enjoys building furniture for his wife.

James and Roxanne have been married for 6 years. Two months into their new marriage they received a call to take in their first two foster children. Today they have 8 kids, 2 boys and 6 girls ranging in age from 4 to 14.  James and his wife are working on adopting all their kids. With a big smile, he said, “It’s our forever family.”

James’s goal is to retire from PESCO noting the standards with which they conduct business, “We care about the products we put out and do so with the highest values and integrity.  It’s part of the reason I am happy to be a part of this company.”