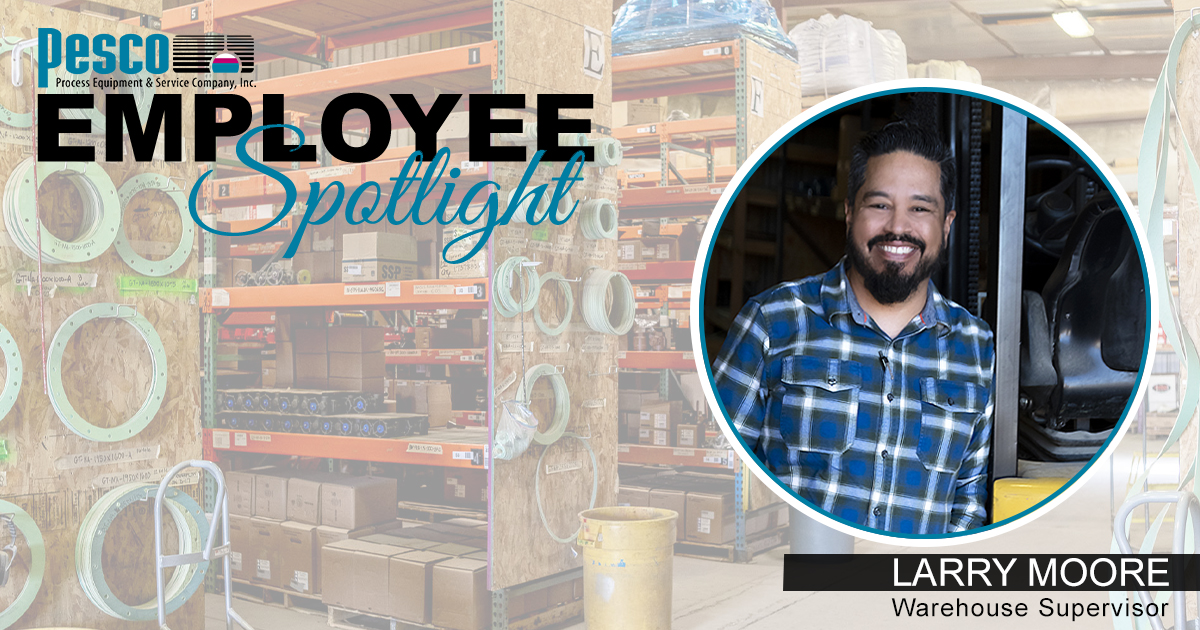 PESCO’s warehouse supervisor brings more to the position than his management experience in retail. Larry Moore is a part-time pastor, who serves the community from his church – Hope City. Moore’s career at PESCO came during a time of transition – it also happened just before the COVID-19 pandemic.

He went to work for PESCO in November 2019, as an errand runner. “I would go after different things people needed in the offices and throughout the plant. I would do mail runs and shop for the different needs in the company,” Moore said. “When COVID hit, they did away with my position.”

Moore was placed on a two-week furlough, and then was brought back as a member of the materials team. “It was a new concept with the company – a team to track materials from the warehouse to the shop and ultimately onto the vessels,” he explained. By December 2020, Moore was the warehouse supervisor.

Experience from his former career played a role into his being able to efficiently manage a warehouse. Moore had moved to Farmington in 1997 to work in management at Wal-Mart. He had been with the company and transferred from Douglas, Arizona.  Moore stayed with Wal-Mart until 2002, when his heart felt a different calling. He wanted to pursue ministry opportunities. Moore was an associate pastor at World Harvest Center, until stepping away to join PESCO.

Moore’s interest in PESCO came from his knowledge of the company. “I heard the owners were very good people and people of faith,” Moore said. He decided if he had to work outside of ministry, PESCO would be the place he would want to be. “That was my driving force with applying.”

PESCO is a business with a Christian philosophy. “Employees are extended family – I understand that – it’s our vision with church as well. Everybody needs a support system – a friend that can help them get through life,” Moore said. “I love the people in my life – peers and those that are in positions above me. Those who I am mentoring as well.  We give up and we give down and we affect the sphere of influence we’ve been given at home and at church. It’s important that we realize we carry influence and to be that positive influence in all that we do.”

Moore supervises eight employees in the warehouse. “I lay out daily responsibilities to get done,” he said. “We receive all of the freight coming into the company. We stock the shelves with it, store it in the warehouse and we issue it out to jobs that call for those materials.”

“The people are what drive me. I love to lead people and be there for them,” Moore said. “I’ve told my folks we’re here to do a job, I want our relationship to be more than that. I want to be your boss, but I want to be your friend. It’s more than “what can you do for me,” but “what can we do for each other.”

Once again, this follows the PESCO philosophy of business and management – it’s about relationships and believing in people, while maintaining a sense of professionalism and service.

“As a leader you become vulnerable at that point. You take a risk. I tell my crew, “Let’s be professional but let’s be personable,” Moore said. “If we’re not willing to take risks, especially in relationship, it can be a lonely place – not only at church or at work, but life in general. I work with a great bunch of folks and they know what needs to be done and they get it done.”

Moore is all about relationships and continues to build them through family, work and church. He and his wife, Serena, who also works for PESCO, run Hope City, a church located at 308 W. Broadway. They do not collect a salary from the church, because they put all of that back into the community. “We’ve helped pay for a few funerals, helped people with car troubles and helped them pay their utilities,” Moore said. “Our vision is to minister to the community.”

The Moores have two grown children: Anthony, 26, and Christopher, 24.  Anthony is married to Stephanie, and they have a baby boy, Reuel. Christopher is studying to be a chiropractor at Parker University in Dallas.

In addition to all of this, Moore serves on the Farmington Community Relations Commission and is board president for Leadership San Juan.