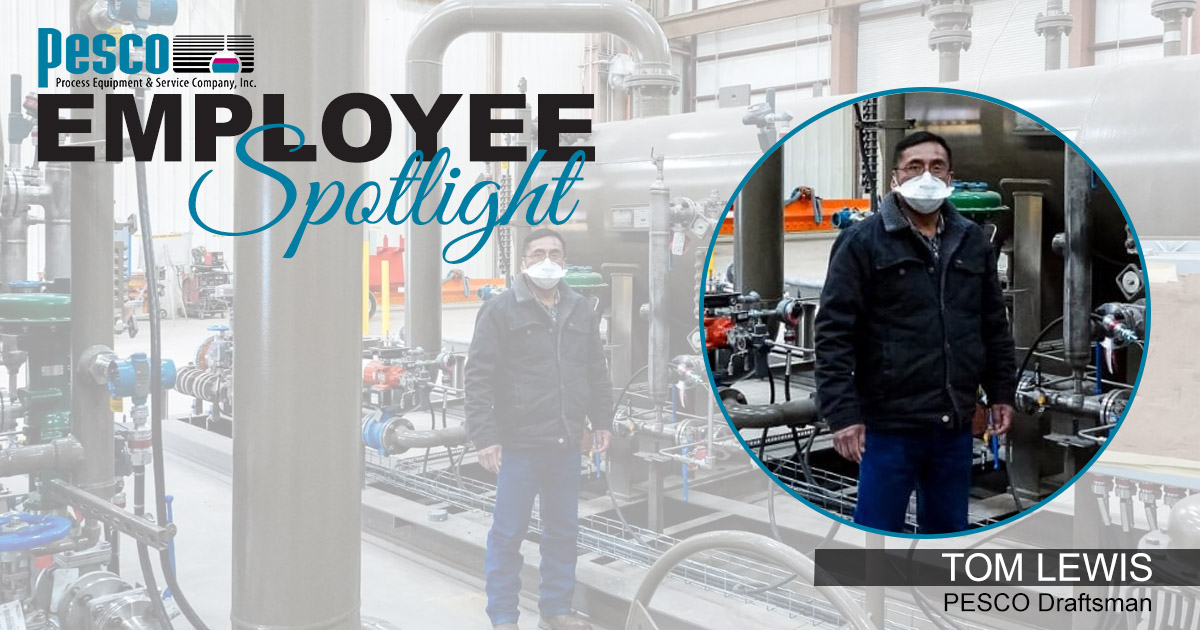 As an employee of PESCO for almost 28 years, Tom Lewis has experienced opportunities he had never considered. He is one who keeps his nose to the grindstone, doing his best to become proficient in every department he has worked. This dedication to excellence has opened doors to numerous departments here at PESCO.

Tom began with PESCO as a welder, and after nine months he took a position as a supervisor in the tank shop. From there, he went on to become a supervisor in the assembly department. With his drive to learn new skills, and quickly recognizing that computers were the choice tool of the workplace, in 2009 he began taking computer classes at San Juan College. It was this decision that led him to earn a degree in drafting.

Tom’s career development, since joining PESCO, has included learning to work as a part of a team and leading a team. Through his years at PESCO, he has learned to identify and empower the people who can do a job well and take the time to train others to the same level of proficiency. He shared a moment that revolutionized his approach to supervising his team. After discussing a project with his then-supervisor Keith Tucker, Tom commented that he would “push his guys to get the job done”.  Keith stopped him and said, “Don’t push them, lead them.” From that moment on, he changed his approach and led his team to become more productive and synergetic.

John Buckles, Project Manager at PESCO, reflected on Tom’s decision to make a change in his career. He said Tom came to his office one day asking about drafting.  John encouraged him to enroll in the Drafting Program at San Juan College, saying he would have a position upon graduation.  At the time, John was head of the Drafting Department at PESCO and an adjunct instructor at San Juan College in the evenings. He said, “Tom had a real edge in the class because he was already very knowledgeable about the equipment.” And as promised, Tom was offered a position as a drafter after receiving his degree. He has been a draftsman at PESCO for the past 10 years. John went on to say, “Tom is a top-notch guy.  He has high values and is a good example of a PESCO employee.”

When asked what a typical day at PESCO is for him, Tom said, “It’s awesome!  There is ease and efficiency as I clearly understand my responsibilities.” He expressed confidence in the leadership of PESCO saying, “Kyle Rhodes (President and CEO) does a good job staying ahead of the game in our industry.  There is great communication regarding what’s expected here at PESCO.”

Tom takes much of what he has learned here at PESCO and applies it in his personal life.  He utilizes improved communication skills, safety practices, as well as organizational systems.  Overall, he says, it makes life better. His favorite pastime is caring for his horses.  “If my grandkids ever ask me to take them fishing, I wouldn’t know how, but I do know horses,” he said with a chuckle. What Tom appreciates most about working for PESCO is the mutual respect, good training practices, and the raising up of leaders. He emphatically stated, “I love it here! PESCO is my second home.”